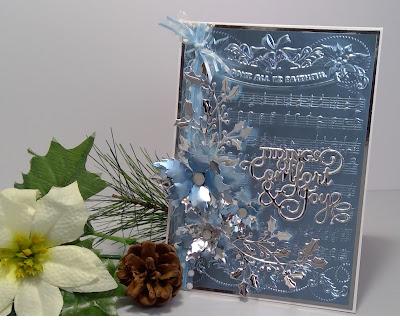 How are we all today?? I have my fingers crossed that you are all well and those of you that are struggling are starting to feel better.

I cut my base card to 7 X 5 inches and then matted a layer of silver mirror card, the next layer (top) was made by running a piece of matt blue mirror card through Crafters Companion's 'O Come All Ye Faithfull' Embossing Folder.  I stuck this down onto my silver mirror card layer and added a piece of Polka Dot Tulle and narrow blue ribbon down the left hand side if the card, finishing it with a knot at the top.
To decorate the card is used the same two mirror cards to die cut John Lockwood's Poinsettia Die, I then alternated the layers and added Sue Wilson's Holly Sprig die for foliage. To finish the flowers I added faceted gemstones to the centres.
I hope you like my card. x

I had a lovely day yesterday, Pat came over and we went out for lunch, we went to the Garden Centre that we have always gone to,  to discover that 'The Works' and 'Bon Marche' had gone, closed down, the Restaurant was also a disappointment, it changed from a 'Wyevale' to a 'Hillier', when we went a couple of months back they had a total different menu, which the explained was a 'Basic Temporary' menu, which they were going to only have while they got the kitchen sorted, but when we went yesterday it was still the same very basic menu!  So we decided to go somewhere else, we ended up going to Toby Carvery, which was delicious and a lovely treat, it was super busy though.
We came back after to do some crafting, Pat started another stunning Groovi card, I think you must have enough to last you a couple of years Pat!
Thank you so much for such a lovely day xxx

After Pat left I was eagerly awaiting a 'scheduled GP Phone Consultation', they called me Monday morning to say that there was a problem with 2 of my Prescribed Medications, I will say I was quite concerned (nothing new eh)!  He eventually called at about 4.45pm and explained that there had sadly been an incident where a chap had taken two of the medicines that I take together and these medications can both cause drowsiness, the chap had sadly taken the drugs together and they caused such a deep drowsiness that he fell into a coma and died.  So he wanted to discuss my medication, I explained that I had been taking the same combination at the same dose for many years and that neither if them made me feel remotely drowsy, he suggested that I thought about lowering the dose of one of them, I said I would think about it although I had been on the medication for so long and the dose had got higher as time had gone on.  I also said that I wasn't prepared to make my life any worse by having to put up with being in more pain than I am now, most people would find the half the pain I have unbearable, I have just had to learn to cope with it, it's something really hard to explain to other people though, he did ask where my pain was, after he had listened to my medical history he just said 'ah you have pain in many places then', I said yes I do, some places worse than others. He was happy with the outcome of our conversation, he was actually a GP that I had never seen but he was really nice and very understanding!  Very sad story about the poor chap though x

I hope that you all have a lovely day today,