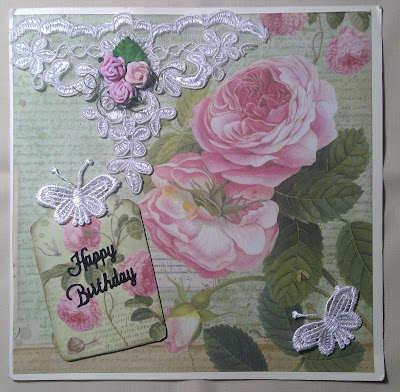 Here we are at the start of another week, I hope to film some video's this week, we now have our internet installed and the other equipment needed for whizzing the internet coverage all over the house, the service we had before barely made it to the lounge! So hopefully any video tutorials that I do will not take a week to upload !

We had a relatively quiet weekend, which we both needed, Saturday was mostly spent in the garden as it was such a glorious day. I was laid awake listening to thunder in the early hours of Sunday morning which bought some fairly heavy rain with it, that rain stayed with us all through Sunday, so we decided to pop to Ikea as we needed some stools for the kitchen table, little did we know that the rain had encouraged what seemed like the entire population of Reading to 'pop to  Ikea' too, it would seem that most of them had gone just to let their children run riot! I have never seen anything like it, bearing in mind that it was raining outside so most peoples shoes would be wet and dirty, the amount of children clambering over sofas and beds, one child that I would estimate at about 8/9 years old was in the centre of a large island full of glasses, wine glasses, champagne glasses etc, she had climbed up through the bottom, her parents were oblivious! Absolutely shocking! Rant over, Soap Box, stowed.

I hope you all have a lovely day,