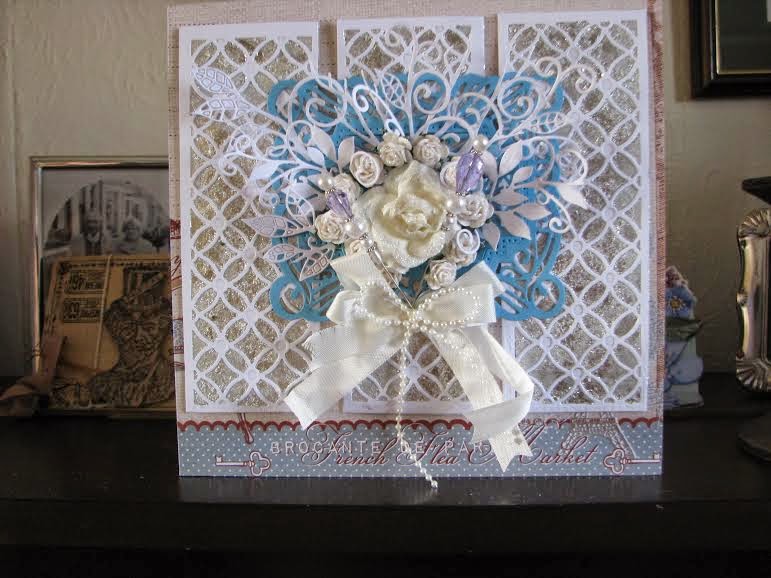 Good Morning Ladies,
Well just look at this stunning card from Janet, what a joy it would be to open a box and see this gorgeous card.
I hope Janet will be calling in later to tell us how she created this beautiful card.
Sorry for my absence this afternoon and evening, we had another eye hospital appointment for Lucy today (not made by the school this time), we had another appointment and we saw a Senior Orthoptist who after examining Lucy extensively, concluded that Lucy had no 'Fusion Processing' which is where the brain uses both of the eyes together at the same time to give 3 dimensional view.
This usually happens If you have had a brain injury, which Lucy clearly hasn't, we then had to wait another 4 hours to see a consultant who just confirmed what the orthoptist had said and has made an appointment for further tests in a months time.
We got to the hospital at 2.30 and left at 7.15pm, what a frustrating, afternoon and now we have been left waiting for answers, this orthoptist has said that all of the exercises and occluded lenses had all been a waste of  time as it is nothing to do with the muscles, so we have  been waiting for months and been given the wrong information all along!  It could literally scream!
Then last night I got a call from a totally distraught Becca who after going out with her friend for a movie and then a coke at the pub, as she was leaving two men followed them out of the pub demanding that she be their 'taxi' she obviously said no and got in her car, so the two men started throwing beer glasses at her car, smashing them on her windows and trying to lift her car with her in it as she had locked herself in! Felt so helpless stuck here, just to add to the stress Paul is away!
Not one of my best days lets just say!
Hopefully you lovely lot will help get me through this day, its going to be a tough one!
Love and hugs
Sandra xxxxxx