Something to Brighten the Day.... 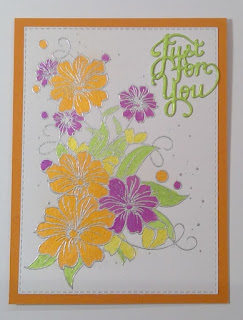 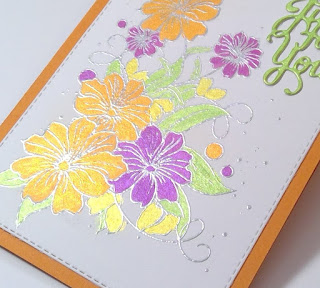 Well it's Ash Wednesday, did you all have your pancakes last night, as I am writing this I haven't yet started the marathon Pancake making session, I will have to have assistance this time though as the new tablets have left me feeling somewhat 'flat'. But never mind.
Have any of you decided to give up anything for Lent??  I could quite easily give up chocolate, although I know that's not the point!  I didn't realise until reading into it that you were not supposed to eat meat on Ash Wednesday or every Friday during Lent, although we often have fish on Friday anyway, this was a tradition that Paul's family have always had and we carried it on.  Although fish isn't the cheap alternative these days, Paul's Mum always talks about getting something called Cod Cheeks from the Fishmonger, they were a really cheap part of the fish back then, if you can get them now they are classed as a delicacy and your are charged a fortune.

Today's card is one of the new stamps I bought at Farnborough from Honey Doo Crafts,  the stamp is called Blooming Flourish, I stamped it in Versamark ink and added Silver Embossing Powder then heat set.  I was undecided about how I was going to colour them so went onto Pinterest and saw a version this coloured in similar shades but with alcohol pens, I didn't want to go down that route, I wanted to use something that I hadn't used for a while (blame that challenge from a couple of weeks back, I've been obsessed with hunting out old materials)!  I wanted something bright and vibrant to really cheer myself up, so I decided to use the Honey Doo Mica Powders, I think I bought them in 2017, they were a bargain price at Ally Pally, I think I have used them twice since then!
So I chose some pretty spring colours and opened the lids, added a few drops of water to each lid and mixed a small amount of the mica powder to make a thick enough paste to paint with (TIP) Mixing the powder in the lid makes for less waste, as when you have finished you just pop the top back on and you can add a little water to remoisten next time you want to use, so there is zero wastage.
After it had dried I die cut the piece of white card and matted on to a piece of coordinating orange card, for the sentiment I covered a small piece of card with the green mica powder and die cut a Sue Wilson, 'Just for You' sentiment and added that to the top corner.

I took a second close up picture to try and capture the shine that the Mica gives, I thoroughly enjoyed my little painting session, I found it quite relaxing.

Oh just an update, I think the total was 30 pancakes, that was without Matt being in at supper time, so he may want to make some when he gets home.

Love and huge hugs to everyone else too,