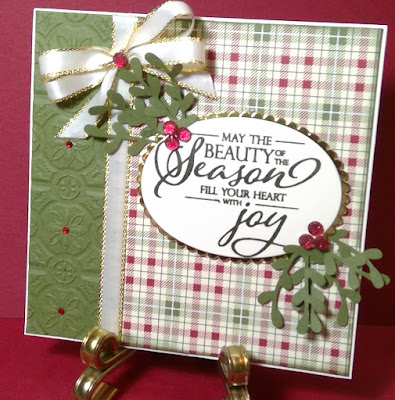 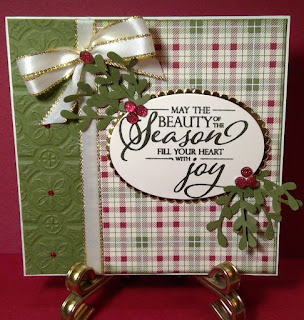 Yes, despite what I said about last weeks card being the last of the Christmas cards I have needed to make a few more. Mind you I was pleased because I found this DSP that I had forgotten about, its called 'Festive Farmhouse' and features all of the traditional Christmas colours, the Stampin'Up! Colours featured here are Mossy Meadow and Cherry Cobbler, two absolutely gorgeous colours that have teamed with Very Vanilla and Gold. My background features a piece of the Festive Farmhousr dsp, I paired it with a piece of Mossy Meadow card that I embossed with the 'Tin Tile' Embossing folder, it has an almost Moroccan style pattern to it, I covered the join with a piece of Gold Foil edged Very Vanilla ribbon.
The sentiment I have stamped in Mossy Meadow and embossed is from the 'Merry Christmas to All' Bundle and reads 'May the Beauty of the Season Fill your Heart with Joy' . Such a lovely sentiment, I die cut it with an Oval Layering Die and backed it with a scalloped oval die cut in Gold Mirror card to match the gold on the ribbon.
I added some little 'Sprigs' of greenery using the 'Sprig' punch, I added three little faceted gems that I had coloured with my Cherry Cobbler Stampin' Blend to look like berries.
I tied a bow with the same ribbon and popped it at the tod of the join, I topped that with another Cherry Cobbler Gem, the last finishing touch was to add some tiny gems to the centre of the embossed flowers down the side of the card.
I do hope you like the card. xx

I have to share a funny story with you, way back in October when Sue and I had our 4 hour visit to the Range I spotted some really cute little 'Festive Robin's they are wearing woolly hats with pom poms on, so adorable!! I thought they would look lovely as Christmas Decorations but also as little decorations to put beside my cards for photographs etc.  Well I had all but forgotten about them until yesterday afternoon when I was about to photograph todays card, so I went off to fetch one of them to use as a prop.  All I can say is that he/she isn't very 'photogenic' !  I will add a photo of him below..... 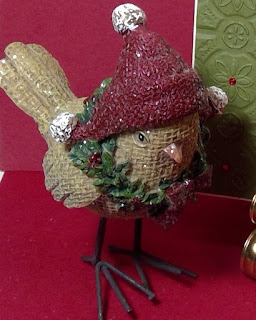 I positioned him next to the card and took a few shots, when I looked them I about had a 'tena' moment, it absolutely had me in hysterics, he looks so bloomin' angry!!  I would go as far to say he looks 'fierce'!  I literally had tears rolling down my cheeks, I think that she is going to be known as
'Riled Robin'  from now on.
I think the problem is that her eyes are too small, actually my Mum-in-Law always says you can't trust people with small eyes.

Now, I never updated you on 'Fantastic Beasts: The Crimes of Grindelwald ', it was a great film that was tied a lot more to the 'Harry Potter' stories, it featured a young Dumbledore who was played by Jude Law, it's quite a 'busy' story line with a HUGE twist at the end.!! 😲

Sending soft squishy hugs to all of you that need one,

Lots of love too,