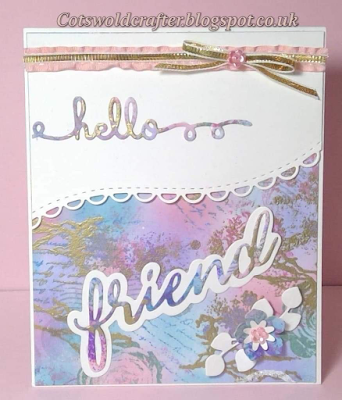 Here we are at the end of another week, this one flew by too, mind you I have had quite a few things on that 'needed' to be finishes by a certain time so I have been crafting a lot more than usual, so could be the reason that the week has gone quicker. It usually helps seeing Sue in the middle of the week as it gives me something to look forward to and breaks the week up nicely.  You would think that I would have overcome me hatred of being on my own but that is one hurdle I can't manage. I know that some people absolutely love time to themselves, I think it's different if you can choose to have to rather than it being forced upon you.

Challenge For Next week:

I have gone for a something completely different Our Next Challenge:

I think it is something we have all been guilty of at some point, we see something on TV or at a show, love the idea of it but when we get it home we either forget what the project is or find it wasn't quite as easy as the demonstrator made it look!!

So basically just find something that you haven't used or haven't used for a while and have a play, I have started doing just that I am totally enjoying rummaging through the things that I have bought at Ally Pally etc with every good intention, opened it, had a go and then popped lid back on and put it away.  I could make a huge list right now, don't worry I won't bore you!  Lilian has been doing exactly this recently with using her Stamperia papers, we buy, we stroke, we hoard!!

My card was made using a full set of Distress Inks that I bought from Joanna Sheen after seeing Jennifer Maguire create something, I opened one or two and had a go at blending but nothing much else, so I put them out on my desk so that I would get sick of working around them but was determined not to put them away without using them.
I also bought the latest edition of Creative Stamper Magazine (issue 67) which has a fantastic set of stamps and talks you through making a background step by step using Distress Oxide inks, so it was perfect for me.
I followed it and made the background for this card. The rest of the card is my own design, I used a Spellbinder Edge die that I also haven't used for a while and a new die set that I bought from Christine at Hope & Chances, it has the 'Friend' die and Background and some stamp sentiments to g with the die, fantastic price too (as always from Christine)x
I finished the card with some ribbon and punched flower.

I am looking forward to seeing what you all haven't used for a while.

Have a lovely weekend, I hope that those of you that are feeling under the weather have started to feel a little brighter.

Sandra
xxxxxxx
Posted by Sandra at 06:00