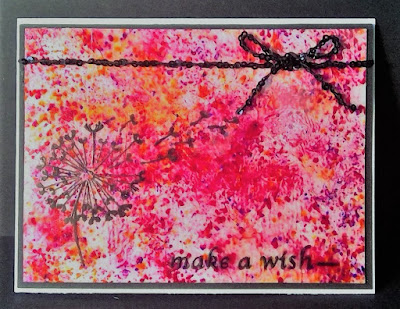 I am featuring another one of my Pixie powder backgrounds today, I'm not so keen on this card, as the stamping doesn't show up on camera as well as it does in your hand.  Stamping onto Acetate wasn't the easiest thing to do either but with the stamperatus I managed ok, I wanted to emboss the sentiment too, which worried me because I wasn't sure if it was heat resistant acetate, but it turned out okay.

I absolutely love the colours in the background, the are so bright and vibrant, I did the 'Caught in Crystal Technique' again, this time though I wanted to try kitchen roll instead of Tissue Paper, mainly because we don't always have tissue paper to hand.  I peeled the layers of the kitchen roll apart and scrunched it and added it to the wet adhesive, it worked fine, although they weren't as many creases but you could see the pattern of the paper, which was interesting in itself.  I have seen some really nice patterns on kitchen roll so may need to experiment further, in the mean time I ordered some cheap 'packing tissue paper' on line and that arrived yesterday, so I am all set for round two.

I mounted the 'Caught in Crystal' piece on onto white card as that showed the brightness of the colours better, I then cut a tiny black border, then added some sequin string and then mounted onto a white base card.  As you move it in your hand the mica makes it look like the colours are moving around, its quite lovely.

Well ladies I finally went to join the new surgery and bought up the AF thing with the new GP, he explained what happens during an episode of AF so clearly, even Paul was impressed, it made it clear to understand why they were so concerned about the clotting and chance of a stroke was so high.  In the consultant report they discussed the findings of the Monitor that I wore for a week last year, it was recording episodes that were longer than an hour, some were over 3 hours before a 'normal' rhythm was regained. This together with the frequency of the Ventricular 'Ectopics' apparently was the cause of the concern, but in the 7 months I have had the Consultant letter my GP never contacted me once to ask me to go in for a consultation.  Anyway I have to start both an Anticoagulant 'Apaxiban' after they get results of a blood test and Bisoprolol to be started immediately.  So we will see what happens next.  Believe me I laid awake all night worrying about his frank description of the risks of not taking medication.
I will say he was a lovely chap, very patient and listened to all my concerns etc.  Fingers crossed we have picked the right surgery.
I did go with Lucy yesterday as she has become deaf in one ear, we have been adding olive oil for a good couple of weeks, so today she was  scheduled to have it flushed out, the nurse was so funny, really put lucy at ease too, she only got some of it out though we have to go back in 2 weeks for the rest.

I hope that you are all well and have been having fun with this weeks challenge.