My First Tone on Tone/Shades of Blue/Greens card 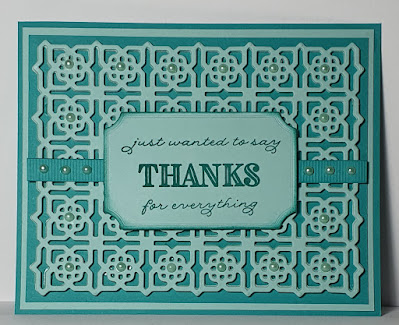 I hope that you are all well and ready for the last week of March, I can't believe its going to be the Easter Weekend in 4 days time. I am looking forward to Paul having the extended weekend off, although I have a suspicion that he may do a couple of hours on Friday,  lord only knows why because he doesn't get any extra money for working the Bank Holidays!  Like most of you we have no plans, the girls are frustrated that their work hasn't been able to open, their boss is too, he was on a local radio station talking about the huge impact missing another Easter weekend will have on the business,  he made a really good point actually, he was obviously frustrated at having to stay closed despite having acres and acres of open parkland for people to enjoy, he pointed out that they control the numbers too by limiting admissions, so people could enjoy the fresh air in a safe environment as apposed to the alternative of visiting crowded beaches,  which is exactly what happened last year, there are a couple of tourist towns nearby that ended up being so overcrowded that the police had to intervene and send people home as there were hundreds of people crowded onto old, cobbled pavements. They are beautiful places, Bourton on the Water,  Burford & Broadway, but not when the pavement comes to a stand still because someone 6ft in front has stopped to window shop! 🙄😔

Anyway do any of you usually have 'Family Traditions' over Easter weekend?

Todays challenge card was made using another 'unused' die called 'Many Medallions' (SU), the set includes a lovely background die that would work just as well for Masculine or feminine cards as it isn't really lacy.  My card base was made using 'Bermuda Bay' card, I matted and layered using 'Coastal Cabana' card, the actual fancy background was cut out of Coastal Cabana, I also die cut a piece of Funky Foam to give me some depth, rather than cutting multiple layers in card and layering them up, it worked really well. To add some embellishment I die cut a piece of the Bermuda Bay card with my 'Fauxgrain Ribbon' die, (I am still buzzing about this die set). I popped the Ribbon across the card and added my sentiment on z die cut labe, it was stamped in Coastal Cabana ink, the sentiment was from 'Ornate Thanks' (SU) Stamp set.  The final touches were pearls added to tje background and across the ribbon strip too.

I hope you like it and it gives you a little inspiration.

I hope you have a good day,