My Birthday Card From Janet 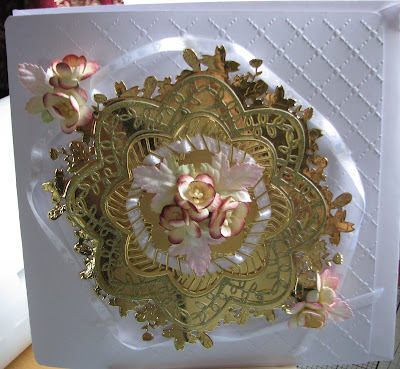 Today I am sharing the first of the Birthday cards that I have received so far, I am so excited to see the rest of the cards I have waiting at home, it makes it feel like its my birthday all over again.

This amazing birthday card is from our lovely Janet and I can tell you that the picture does not do the card enough justice, it is so beautiful, it has all of the luxury elements, Gold foiling, pretty ribbon and paper flowers. Janet actually makes her own card bases, so the whole card base is beautifully embossed with Sue Wilson's Heart Lattice Embossing Folder, Janet has then built up a three layer die cut , the back/base is a gold foil beautifully intricate flower edges base, the next layer is very fine gold glitter cars that has a vine kind of pattern, the top layer is a also gold foil but not a shiny foil, I really love this new non shiny foil! Janet has woven ribbon through this top layer and filled the centre with paper flowers and foliage.
The gorgeous finishing touches are a heart printed satin ribbon that Janet has arranged around the die cut and then more pretty flowers placed where the ribbon meets and in the opposite corner.
Thank you so much Janet for such a stunning birthday card, I absolutely love it.

I can't remember the last day I described to you but I think it was Sunday, so onto Monday, we awoke to rather a cloudy overcast day, but to be honest nobody seemed to mind as we were all ready for a lazy  day, I had four blog posts to start to schedule, Lewis and Sophie and Lewis planned a 'Movie' day, Lucy was looking at Open University courses, so everyone kept themselves busy.
I kind of needed a break from walking on the beach too, we went into the Pals old town on Sunday evening and the streets are all ancient cobbles, which makes using the wheelchair super uncomfortable, so I just used my crutches, some of the roads were quite steep and the cobbles made it very hard for me to walk on but the views were worth it, some of our favourite shops and boutiques were closed though, we weren't sure whether it was because it was Sunday or if it was just because it was so late in the season.
We aren't sure if that's why the weather has been so changeable this year too, we were about 10 days later coming this year, mostly because this was the only time accommodation was available added to the fact that we didn't need to worry about school term times.

I hope that you all have a lovely day however you are spending it,