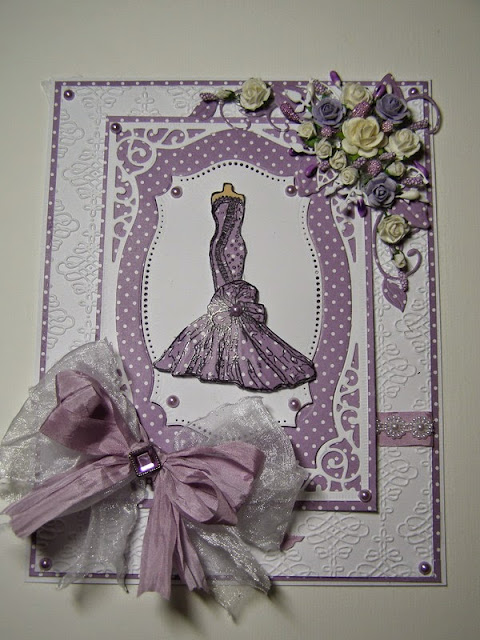 Today I am afraid I am not up to doing a new card to share, the Funeral service was lovely and very emotional, My Uncle, who is married to the aunt that died was absolutely distraught, I was sobbing so much he was physically shaking bless him, it was so heartbreaking to see, that started Mum and her Sisters off too, but as the service progressed everyone settled.  I was so pleased we made the extra effort to go,
I got to see cousins and family that we hadn't seen for years, its so sad that we don't seem to have the big family weddings anymore, therefore the only occasions we get to meet are sad ones!
We made it in good time thankfully, the journey home however was a catastrophe, we left mum's at around four, went for petrol and picked as few bits up in the supermarket, headed up the A12, which bearing in mind it was after 5 when we were hitting Chelmsford was fairly quiet, we then got onto the M25, after about 1\2 we ground to a halt, all four lanes were stopped, we waited and the saw flashing lights in the distance, trouble was they were using the Hard Shoulder as an extra lane, so emergency vehicles couldn't get through, cars were doing all could to make room, vans were parked up against the concrete crash barrier in the centre and we were all but under the lorry in the adjacent lane to make room, it was chaos, I got to thinking how having the hard shoulder as an extra lane may help traffic flow but in the case of an accident does the extra hold ups for the emergency services taking the time to weave through 4 lanes of compacted traffic directly affect the outcome of the casualties??
We were sat in that same spot from 17.30 until 21.15 when they eventually opened the motorway again, so 3 hours on top of the three houyr journey, we got home after 11pm, I have never felt pain like it!  I have to say that I am grateful that  we made it home in one piece though as there were at least 3 families whose lives were devastated during the evening, it was a collision between a lorry and 3 cars, the impact so hard that one car had gone through the metal barrier (to which there was at least a twenty foot drop at tgev otherwise), one car was attached to the metal barrier, barely recognisable and the third car was facing the wrong way, it looked gas though it had been hit so hard that the tailgate was at the back of the front seats, so tragic , I just pray there were no fatalities, however I think that is highly unlikely, so I am happy to suffer today and have a horizontal day, be thankful that we made it home in one piece.
I tell you, I didn't realise how much more vulnerable I would feel being in Becca's tiny car, compared to ours!

This card was made early part of 2015, using Majestic Labels 25 and one Sue Wilson's Gala Dress stamps I think, I stamped it onto some Anne Marie Design Dotty card and cut it out, I decoupaged the bottom of the dress for dimension, the added some flowers and ribbon to embellish! Surprisingly it hasn't really dated, whereas some of my older cards I just look at and shake my head!