An idea for a Man Stepper card 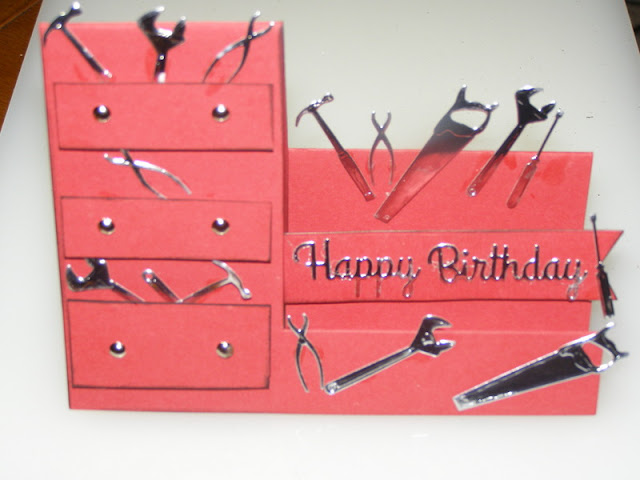 Today I thought I would share an idea I had for a 'Man' themed Stepper Card, (or a lady mechanic too)!
I bought the little tools die recently from Klassy Kards I believe they are Memory Box Man Tools die.
I kind of had to rush this card, I think the tools would look even better if you layered the handles in different colours etc, but they are the cutest little things ever, it never ceases to amaze me how much detail you can get in such a tiny die.
You probably don't need me to tell you, but I cut the 'drawers' from the same red card as the stepper card, you can do them any size, I used tiny brads as handles, then inked around the drawers with Black ink to give a shadow look to them, mounted them onto adhesive foam to lift them away from the card, I then added some of the tools in the drawers and some on the steps, the 'Happy Birthday' is a Spellbinder's die cut out of the same silver as the tools.
I must also apologise as the glue was still drying when the photo was taken!

Now onto the reason for the mad rush card making at 10pm!!!
The girls came home from school yesterday after a few sleepless nights waiting for the results for their exams, my goodness me the tension has been unbearable, Lucy had pretty much given up the idea of doing any A levels altogether and Sophie had convinced us and herself that she had failed everything!  So in the come, Lucy looked close to tears, then announced that she had pretty much got A*'s A's and a B, Sophie the same but with a C, so a celebratory tea was called for, dads previous bargain shopping meant there were enough steaks in the freezer, we added chips, onion ring's and mushrooms sauteed in butter with garlic and parsley and some French beans! Which was very well received by all, I think a certain two little ladies will have slept better last night!

I am off to Pat's today with Sue, for a little bit of fun and laughter!
Have a good day ladies
Hugs
Sandra
Xxxxxx
Posted by Sandra at 06:00