A Stunning Card by Janet 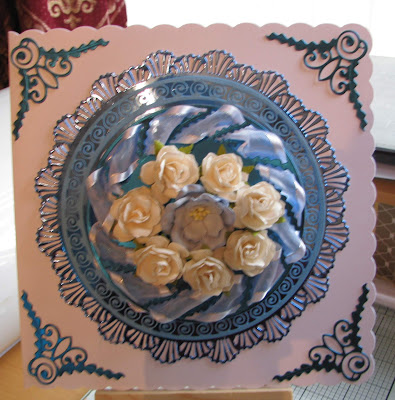 I couldn't wait to share with you all this stunning card that Janet has created, using Tonic Oceana Layering Die Set. 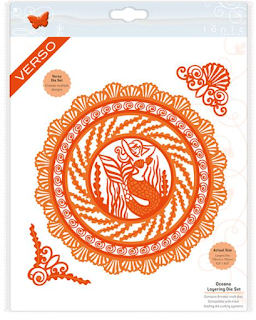 Such a lovely die set, I was wondering why it was called 'Oceana' but seeing the mermaid in the centre kind of gives it away.  I guess the outer edge looks like shells too.
Janet you have given this card your 'Special Touch', your ribbon weaving is just stunning and I love how you have topped the centre off with a lovely wreath of roses.  I think that beautiful shade of blue foiled card is what really makes the card pop.
Where do you find these lovely colours Janet, are they the Crafters companion foiled card range?
The beautiful corners make the circular design work perfectly on a square card base.
Thank you so much for allowing me to share your card with everyone today Janet.

I will add the grid again today as it was obstructed by the notifications on the side of the Blog yesterday. 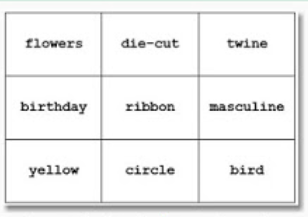 Now I was so pleased to see that it wasn't just me that needed the Soap Box yesterday, if got a right good breaking in for the New Year, I think we may need two!

Lilian I think you have been treating appallingly, if you don't want to fight your corner then please Email me your order number and details and I will 100% try and resolve the issue, take lots of photos too, thats what I did on Saturday, to show the damage.  Let me know if I can help you though my lovely, £10 no way covers the damage caused, it never ceases to amaze me how poorly they think that they can get away with treating their customers.xxx

I had an issue with them last Sept, I had ordered some stamps earlier in the year that happened to be on Easy Pay, in fact it must have been soon after we moved in, as after we had changed the addresses on our Bank cards etc (which I I had notified them of).  Anyway the last transaction didn't go through, so I called and paid over the phone, they chap had said everything was fine and resolved.  So I thought no more of it, until September time I had a letter threatening to involve a collections agency, well, you know how badly my anxiety affects me!! I got straight on the phone and asked them to explain, I told them that I had called and paid the £7.25 over the phone and was assured by the agent that all was fine.  She could look on screen and see that I had called  but explained that that payment had been declined too, so by this time I was getting a little bit 'pissed off' (sorry no polite way of getting my frustration across).
I asked her to read me back the details that they had for me on file, bearing in mind that they had sent the stamps to this address!!  They were using our old address and get this, when that didn't work the only other address on the account was Pat's (as I ordered some pencils for her years ago), this was the reason that the payments were not going through, they were using the wrong address as verification.
She then started to apologise and she had never known this happen before etc etc, she then offered me a 'Special Code' for the next time I ordered etc.  I categorically refused then and there to ever shop with them again.  If I see anything on there that I like I go and order from the company direct, I think the company benefits more from that anyway as they aren't having to give a percentage to Hochanda.
Take my Derwent Coloursoft pencils as an example, Hochanda had them on a 'Super , amazing' offer price, I automatically check online to compare and on Amazon they were £40 cheaper with free next day delivery!!

Update on my Soap Box moment.....Still no Ink Cartridges, they chap is now blaming Royal Mail,  although I explained to him that Royal Mail had been and delivered both our Mail and parcels today, just not anything from them.  I am awaiting his response!

The Works emailed today and have asked for Photos of damage, which I luckily took at the time!

Right Ladies I think that we should balance out these Negative Company comments, so lets hear a company name from each of you that has given Outstanding Service...….

My first one would be Ben at In2Craft (was SET Craft) for super fast delivery and all round Great service.
I look forward to reading who yours are…..