A Fantastic Man Card By Michele 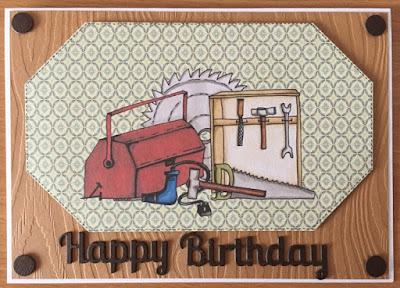 Good Morning Ladies,
Well yesterday turned out to be 'One of those days'!! I think that I was on edge as I couldn't stop worrying about Matt and his Hearing. I was on edge all day.
While we were waiting to hear from him we had to repair some of the Fleece tunnels that we have protecting our cabbages, sprouts, kale etc, the high winds must have made them rub against the frame and a few tears have appeared, while Paul had the covers off I said that I would do a bit of weeding around the plants, some of the leaves of the kale looked a bit odd, so I got my kneeling cushion and had Paul help me get down to investigate!  Oh my goodness was I in for a shock, not only do we have Greenfly, we have Black fly and White fly bugs, it looks like they curl the leaf over and lay their eggs inside the curl. We have a spray for these bugs that is ok for Edible crops, I didn't really want to use anything to be honest, so I started out with a bucket of soapy water and paper towel, I started literally wiping the bugs and their eggs off of everywhere that i could see, I gave me great pleasure to squeeze the life out of the little pests! I did end up spraying the plants too as the infestation was so bad, although the plants still looked healthy. I swear that only we could have all three colours of pest! In fact there was a brown/red coloured one too.
I thought that the fleece tunnels were to stop 🛑 the bugs! I will let update you on the progress!
matt didn't call until 3pm, his Hearing lasting over 2 and 1/2 hours, (mind you he can talk)! He said that he got all of his points across and the lady seemed to be considerate, she asked him a lot of questions, apparently the letter he provided from the Arthritis Clinic wasn't good enough, Matt went on to say that he had a full conversation with a Lady in HR where they went through the whole letter from the clinic and she actually told him that based on that information her would be Furloughed until end of July.  She didn't mention that the letter wasn't sufficient evidence, they also never contacted him after that to say that they needed further information. One of the problems is that the Nuffield Orthopaedic Hospital is one of the leading Arthritis centres in the country and therefore trying to contact your consultant is a major problem on a normal day let alone during a major pandemic. When he spoke to the Consultant Secretary she just sent him the letter that everyone in his situation had.
So now we have to wait for her decision, he isn't really sure what he wants the outcome to be, apart from not being 'Dismissed' as he is worried how that would look to future employers.  He said that he doesn't really feel that he wants to continue to work for them, knowing what he knows now, but at the same time he needs a job so he may have to go back until he finds something better. Which isn't an easy task right now.  Please keep your fingers crossed for him ladies, he really needs all the support he can get .
Today's amazing Man card is one of Our Michele's, she made this card for her Brother in Law who makes Custom Built Staircases, so this card will be perfect.
Michele used a CD Rom Called 'Fabulous Fella's, 'It's a Man's World. 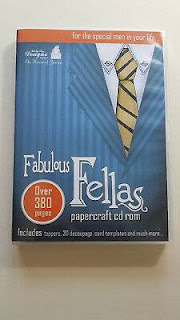