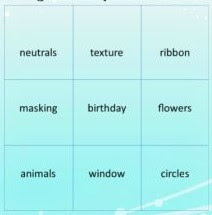 I hope that you are all well, it's nice to read that you are all getting your Vaccinations done, One thing our Government have got right compared to other Countries, we are ahead of them all I think as far as vaccinations go.  I am hoping that we won't be too far down the list, it would be nice to manage a meet up later in the year if we have all had vaccinations and the cases have come down.  This latest strain has certainly increased the number of people that are passing away from the virus, although they said it doesn't affect people any different to the regular strain, unless it's sheer number of people.  They have said that it is infecting younger people this time and my sister has confirmed that. S, o lets hope that they continue to keep the vaccination pace up!

Have any of you got any plans for the weekend?  Crafting, gardening, exercise??  We will be preparing for the girls 21st Birthday, I can hardly believe that it was 21 years ago, what a shock finding out that we were having twins at 20+ weeks.  I had 3 attempts at an Amniocentesis (where they inject through your abdomen to collect amniotic fluid, the Doctor tried 3 times and got nothing, so I told him to stop, so we were sent for a CVS where they take a sample of your placenta, both very invasive with a risk of miscarriage, but the blood test that I had at 18 weeks showed an abnormally high level of HCG which had I been carrying one baby as they thought would indicate a high risk of birth defects.  What a nightmare that was, after the CVS which we had to travel to Nottingham for they do a scan to confirm that all is still well with the baby, the lady consultant went white and asked us to go to a different scan machine that was more detailed, we obviously thought something had happened to the baby, she had tears in her eyes and said that she was so sorry that we had been put through all of the very invasive tests, she explained that the high HCG count was due to the fact that I was carrying twins, so twice the level of hormones, I wouldn't mind but I had asked my Midwife twice if she thought I could be having twins as my bump appeared at just 12 weeks, by 20 weeks I looked like i was 6 months pregnant. She explained that the babies were lying one in front of the other, making it harder to detect, I still think its bizarre that they were missed on scans at 12 weeks, several times during first procedure and the lady scanned me again to find position of the placenta and then used the scan to guide her needle but never once did they spot two heads! Paul needed to sit down for a minute or too, we were both in shock, it turned out to be a huge blessing, they are the best of friends and always have been, which makes things like being stuck at home during lockdown a lot more bearable for them for one thing!

Sorry for the ramble but I think it's quite a fun story, although it was a little stressful at the time.

I thought that we would go for our first TicTacToe Challenge of 2021 this week, I picked one that had some different Options to some of the ones we have been doing.  There are enough categories to cover most occasions. 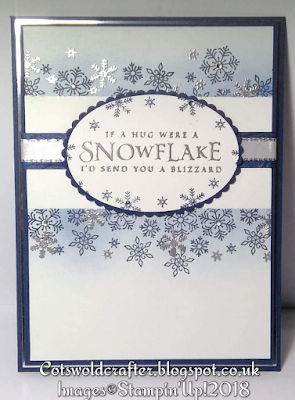 This card for example I used masking tape to cover the void between the two stamped snowflake borders. 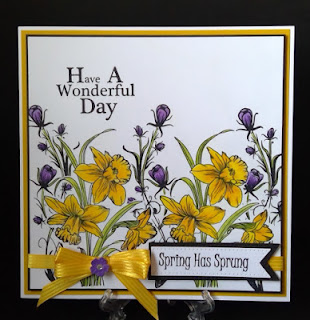 This card used the other Masking where I masked off the daffodils to stamp the Crocus flowers behind.
WINDOW can either be a view through a Window stamp OR an aperture in the front of a card.
I think that all of the other categories are self explanatory, I hope that you all enjoy the challenge, I have some new goodies to play with so I hope I can work them in to my challenge cards!!
Whatever you are up to this weekend I hope that you have an enjoyable one, I think that we are forecast more snow on Sunday, so watch this space.
Stay safe and warm my lovelies,
Sending Love and hugs to all of you,
Sandra
xxxxxx