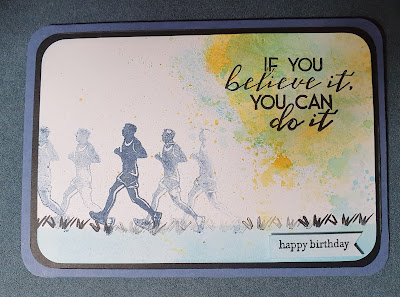 Here we are at the middle of the LAST week of January, I just can't believe how fast this month has gone, you would think that as we are not leaving the house any where near as much as we would have done 'pre-covid' the time would drag, but no!  Mind you maybe the sooner this year is over and everyone is vaccinated the better we will all be.  I saw that the death toll was over 1,600 again yesterday taking the overall death toll to over 100 thousand, which is unbelievable and just devastating.  This coming Sunday marks a year since the first patients were treated in hospital in the UK.  Despite these frightening figures people still seem to be carrying on as if nothing is happening, my sister was saying that they had people with cameras walking around their hospital asking where all of the 'covid' patients were, saying that this all just a hoax, I said that I would have dragged them to the Covid ward's' and tell them to roll up their sleeves and help, without any protective equipment as it's all just a hoax so they wouldn't need it.  Apparently the nurses and Consultants have been met with crowds of these people when they leave after a long shift, which must just be soul destroying!

Janet I hope and pray that your Granddaughter recovers quickly, fingers crossed having the vaccine will mean she will have a milder case. It doesn't make it any less worrying though, there isn't a day goes by that I don't seriously worry about both of my sisters who both work in situations that put them at risk, along with our Michele and Sonia who also go out to work in places that could put them at risk, I know that you are all doing everything you can to stay safe but it remains a worry, you are all so incredibly amazing and we all owe you a huge debt of gratitude.

Now onto today's card, a more 'Mixed Media' style card, you know I find getting a 'messy' background to look 'right' so much harder that a non messy background!  I took three attempts to get that inky/messy top corner right, I'm not sure if it wasn't messy enough or too messy but it just didn't lool right.  I found the easiest way to get the right 'splodgyness' was to smoosh the Distress ink (not oxide) onto a cello bag and then spritz it with water and then using the bag to position the ink into the right area and then just smoosh it on, I added the 'Wild Honey' ink first then dried it and then added 'Tumbled Glass'  to the cello bag and repeated the first step. After drying again I used a fan paint brush to pick up some of the wet ink off of the bag and flicking it over the card.  I blended some Tumbled Glass ink along the bottom of the card, stamped some grass and then used Stampin Up 'Misty Moonlight' ink to stamp the first runner and then used second and third generation stamping to give a lighter look to the other runners.  All of the elements used to stamp on this card were from the free sheet of stamps that came with this months Creative Stamping Magazine (issue 92).

Paul had a nightmare job trying to defrost the car yesterday morning at 6.30am, he puts a cover over the whole car, which was covered in a thick blanket of frozen snow, it was like one huge block but had frozen the car cover to the roof, the doors were frozen shut too, our drive is treacherous as the snow still hasn't melted, it has just frozen solid and was exactly the same as of 5pm yesterday afternoon, the temperature just hasn't risen enough to thaw it, even with the sunshine we had on Monday.  I think that it is supposed to clear over today and tomorrow, we are then forecast more rain and then we have a 70% chance of more snow next week.  The good thing is with his new position Paul can work from home most days so even if he can't get into work he still gets paid, unlike the last time we were 'snowed in'.

Stay safe and warm my lovelies,