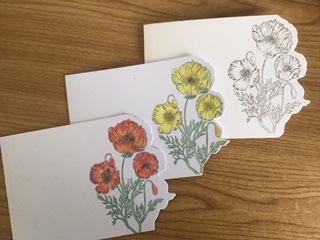 Good Monday Morning Ladies,
I hope that none of you blew away in those blustery winds yesterday, my goodness they were so strong at times.  What made it unbearable was my bloomin' Hair!  It's too long, the fringe is at the tip of my nose, the sides just hang over my ears and it's driving me nuts, I had to be a couple of Hair Clip things (like a comb claw kind of thing) so that I can sweep my hair back out of my face, although I really don't suit having my hair pulled back of my face but it's the lesser of the two evils right now, I still have 3 weeks to wait, if I haven't taken scissors to it by the end of the week it will be a miracle!
I was so jealous of Michele getting her hair done yesterday, she looked amazing !
I was planning an afternoon in the craft room yesterday preparing my blog cards for this week but that didn't happen, we had an emergency in the veg plot to attend to and Matt popped over with his Girflriend Alex later in the afternoon, before I knew it it was 7pm and I had made nothing.
We wanted to spend time with Matt preparing for a Hearing at his work as they had Furloughed him from the start of lockdown due to him taking Immunosuppressive Drugs, he was advised to Strict Social Distance which was impossible as he drove in a van with a colleague, they chose to Furlough him and said it was fine, his safety was there priority.  Until two weeks ago when he had a call asking if he 'Wanted to Resign' so that he could find a job that he could do while Social Distancing, he said 'No I want to return to my job' the lady said that she would call his Depot to see what they could do to get him back to work, she would let him know results of call the next day, which was a Friday, he received no call or message.  Then on Tuesday of the following week he received an Email stating that he had been 'Dismissed' as of Monday 22nd June, he had 5 days to appeal that decision.  This absolutely devastated him (as it would anyone).  He sat with a friend that has experience of this situation and put a very professional email together, explaining the reason that he is appealing, he sent that on the Thursday and received a message back within 10 minutes notifying him of his Appeal Hearing, which is today.  I will be able to think of nothing else today, fingers crossed it goes OK.
Today's lovely cards are Our Brenda's, I have to say that I really love poppies, I have seen some beautiful poppies in a variety of colours and they are all so delicate, yours are much better though Brenda as they last a lot longer!
These three cards would make a beautiful set of Notelets to give as a gift to someone that is stuck at home right now.
Brenda made these gorgeous Notelets with the Gemini Poppies stamp and Die set, the set has two dies that cut either side of the poppy, like you Brenda I think I prefer just using the one and having it as an edger die, it looks so effective.
Thank you so much for sharing your cards with us XXX
I hope that today is a little calmer Ladies, have a lovely day however you are spending it,
Love and hugs to all of you,
Sandra
xxxxxx
Posted by Sandra at 06:00