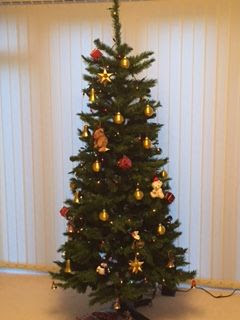 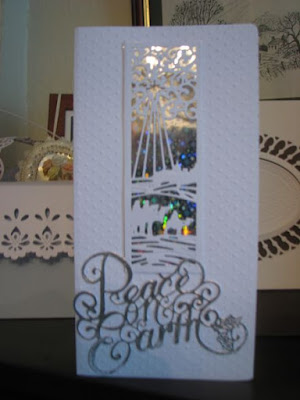 Two treats for your eyes today, Our Michele's Christmas Tree and a lovely festive card from Janet.

Michele your tree is very tastefully decorated, I love your gold and red theme, we have gold and burgundy, although I would gladly have a change but Mr Grinch says there is plenty of life left in the baubles we have got, maybe I should stop wrapping them up so well each year!
Now my biggest decision this year is.....tinsel or not to tinsel (that is the question)???, at the moment the tree is sat naked apart from its adornment of freshly promarkered lights, I look like smoked 50 cigarettes last night with my stained gold/yellow thumb and forefinger! I cannot move forward until we have made this decision, we do usually have tinsel to make the tree look fuller, but as you can see from Michele's tree it looks quite stylish without, I get a bit OCD when it comes to hanging me baubles too, getting the colour triangle right, trying to make it look 'balanced', but I am not sure why as I will go into the girls room and the tree that they have (our old artificial one that is still looking fab 10 years on) and they have the multi-coloured lights, flashing away and they have just thrown every decoration that is in the box at it, which mainly consists of all of their 'makes' from nursery and through school, there is everything from hand stitched stockings and stars to loo roll snowmen, made from the loo roll holder and balls of loo roll scrunched into balls and stuck on, there are also Salt dough stars that have slightly distorted in shape with the heat of the loft, but I just look at that tree and it fills me with pride and joy and happiness, I love it but I just don't think I could sit and look at the chaos 24/7.
Michele thank you so much for letting us glimpse into your home, your tree is perfection itself, I really appreciate you taking the time to photograph it and send it in xxxx

On to Janet's Classy Silver and White card, I really do think that just having the two colours, both quite neutral gives that really classy 'High End' look, Janet has used Sue's (CE) Three Wise Men Mini Striplet die to die cut some white card, that had been embossed with dots, she had then popped some Silver Holographic Mirri card behind the die cut, the sparkle from the holographic card really does capture the 'follow the star' theme. I hadn't really noticed the 'Peace on Earth' die from Sue's range before but I really love it and at the moment I think that that is the one think that every single person would have at the top of their wish list, so I think I may well be popping that one in my basket for next year!  I did buy the 'Peace' die last year but have found that its design is quite hard to work with and I haven't found much inspiration online either.
Janet I love your card, it ticks so many boxes and it is perfect for popping in the post too, thank you so much for sharing it with us xxxx

Our lunch out yesterday was lovely, its nice for us to relax and just be able to sit and talk without the distraction of crafting, we had a lovely dinner, good honest pub food, I went retro and had Scampi and chips, I haven't had that for years, all I needed was prawn cocktail and Black forest gateau to finish the theme, but as Pat mentioned yesterday we had the most delicious, calorific pudding ever, it came it what can only be described as a vase, on the top was Mint Choc ice cream that had been mixed with every Mint chocolate bar that exists, Aero (whole squares), matchmakers, after eight and something else too (I can't remember), it was topped with Cream, and as we had told the land lady that we were sharing the dessert she had the chef put three flakes and three wafers on top, which was a lovely gesture, oh ladies it was heaven, I am not really a pudding kind of gal, I would prefer a starter normally, but when I read this on the menu and its alternative which was Choc/orange ice cream with orange matchmakers, Terry's Chocolate orange, maltesers (too name but a few) of the orangey treats, I was sold and spent most of the time eating my main course thinking about the dessert and whether my two chums would be up for a three way split, needless to say they took very little persuading!
We were then all but chucked out of the pub as the were wanting to close, it was about 3pm mind you and we had been sat since 12.30!  we went back to Pat's for a cuppa and continued chatting away while Pat had her 'hooves' trimmed by the (now what did she say was her title???) FCP!! My first thought was    the place you went for condoms and contraceptive advice when you were newly married, but that was FPC, (Family Planning Clinic)!! Foot Care Professional, that was her title, I personally think that Chiropodist was a perfectly good title and like Maureen Lipman used to say about having an 'ology', I thought anything with an 'ist' on the end sounded professional, I dread to think what they call gynaecologist now.... VCP ??? I suppose it could also be FCP, feel free to add your own idea's!
The lady did make us laugh though as she said that she normally has to sit there thinking of things to talk about but she had enjoyed listening to us and joining in, she said the time had flown!

Proud Mummy and Daddy night tonight as we have Lucy's 'Orchestral Miscellany' at school, I am really looking forward to it as their Orchestra is just amazing, they sound truly out of this world, their tutor is a bit of a tyrant but boy does he bring the best out in them, he knows it mind, you can tell when he comes out in his tail coat with his baton in hand, strutting like a peacock, (I had better read that again, I don't want spell checker getting that lot wrong )!   I can't help myself, seeing my children perform in any thing makes me burst with pride and makes my eyes leak, just a little!
Our Soph is totally out of performance of any kind, I think that the stress of these exams combined with a cold and just being tired as its the end of term have taken their toll on her and she is really under the weather, hot, tired, she slept from when she got in tonight, so I think the end of term can't come to soon for her, only another 2 1/2 days to go!

I just want to thank you all for popping in and out so much yesterday, I was so taken aback from the number of comments, loved hearing about Thomas and Zoe's school performances, oh and Norah's delivery man, Wit woo!!  Norah, I think we will all be chipping in to send you daily deliveries, mind you you can't blame the chap, despite what has been 'put' in your head, you are a truly beautiful lady inside and out xxx
Thank you once again ladies it was like the old days,
I do hope your schedules start to ease a little as the school term ends, I don't think there is much else happening for a week or two is there???!

ps. sorry for the War and Peace post today, I think I may have been affected by mint chocolate! xx