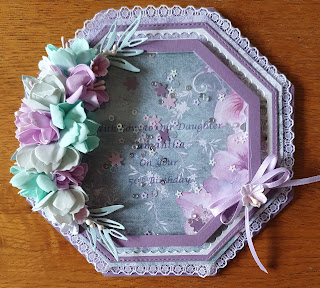 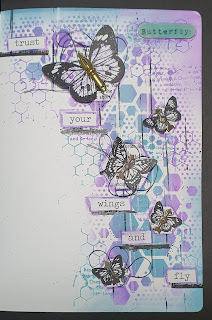 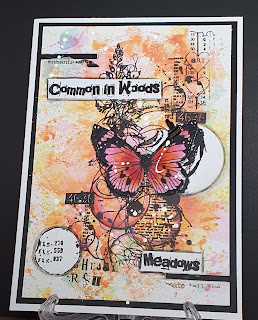 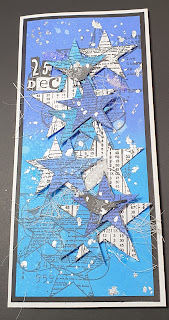 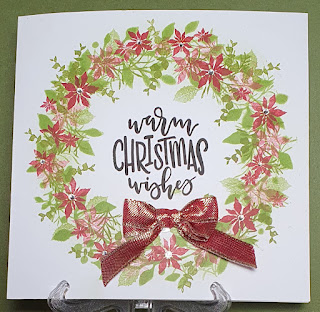 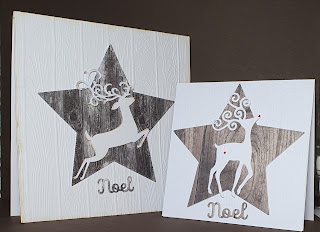 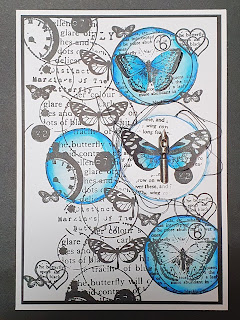 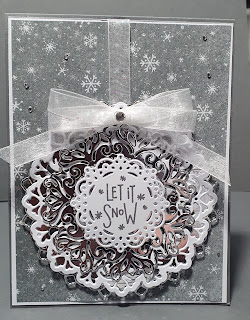 Pinch Punch First of the Month! Goodness me ladies, how can it be April?? It feels more like January to be honest, we didn't get any snow though, a little bit of sleet mid afternoon but that was it.  It was lovely to see it throughout the country.

The wind did blow in something nice though.......Sue came to visit, it was so lovely to sit and spend some quality time together.  I didn't craft but Sue sat doing some colouring while we chatted. It was so lovely to have the company.  We covered everything in our conversations from Bra strap cushions, paintbrushes, family, to Fish Fingers (and whether they go with mashed potatoes) and companies that become insolvent and owe the HMRC vast amounts of money!  We did manage a good bit of craft chatter in the afternoon too, we spoke at length about the demise of The Craft Channel or C & C as it's now called, we both agree how much of a disappointment it is, I even did a schedule check to see if things had changed but NO! In fact I checked the whole weeks schedule and there is a Stephanie Weightman company (Highlight Crafts, Carnation Crafts, Tattered Lace and the new Fabric company, 2 Red Robins and the Mel Heaton one), it is a disgrace to see basically one company/person have such domination of Craft TV channel !  It has certainly changed my viewing, I barely even put it on, when I do it is to check the Schedule to see if there is any of the original Craft Store/Hochanda companies featured. So frustrating.

Now speaking of Tax Man, our poor Matt got a letter back in February saying that they had done an Assessment of his Tax Returns and that there was a discrepancy on the 17/18 Return, they had worked out that he owed them £3100 but with interest it was £3,611, to say he was shocked was an understatement, he contacted them straight away to get to the bottom of the problem, the only way he could contact was by letter, which he sent 'Signed For' which they never did.  He waited and worried and after a few phone calls that were no help he waited until 18th March for a response that said that they had taken the evidence he had supplied into account and 'Removed the Assessment' and the balance showing was now correct, accompanying the letter was a statement that had an amount owed of £3,611, we were all 😕 confused, even when Matt checked online it said that the amount owing was the same.  So Matt emailed again explaining that we were all confused, explaining that his letter hadn't explained anything.  The Tax inspector replied by mail, his letter arrived this Monday, in it he apologises for the confusion and goes on to explain that when they had Assessed the 17/18 tax return they had used erroneous information, he went on to explain that Matt had at no point given any information that was wrong, he had filed his Tax Return correctly.  He went on to explain that he had removed that particular assessment and therefore there was no amount outstanding.                                At no point did he apologise for getting it wrong, for making such a big mistake, the apology at the beginning of his letter was for the fact that he hadn't explained himself clearly in his first letter.  If he could see the amount of stress that Matt suffered for the past 8 weeks, thinking that he had to pay out a huge some of money.  All because they accused him of not paying tax while working for a company that automatically deducts your tax and NI. Thankfully he is now reassured and can relax. It certainly pays you to question their demands. Anyway Rant over. Soapbox back under the stairs.

I was undecided on this weeks challenge (as always) but decided to go for SHAPES,  you can choose any shape you like, you don't have to use the same shape for each card either.  So that way you have quite a variety to play with. I have shared a few examples above, I am perfectly happy to accept that a wreath is a Circle so you don't have to be too strict. After all these challenges are meant to be fun as well as encouraging to sit and create. Whether it be journal pages or cards I love to see you all crafting.

As always I look forward to seeing what you create.

Have a lovely day my lovelies and stay warm,