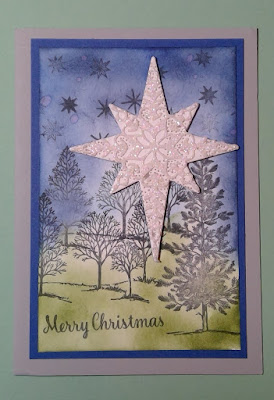 Today's fantastic Christmas card is the one I received from Our Lovely Cheryl, I have to say Cheryl I was utterly thrilled to see a totally stamped card, I am touched that you went to so much effort.  Cheryl has used all Stampin Up Products for her card, the background is made up of the 'Lovely As A Tree' stamp set, Cheryl has then created a blended ink background, I love how the trees go off into the distance, with the larger ones at the front of the card.  Cheryl has then used the 'Star of Light' Dies to create that beautiful glittery Star.  I absolutely love your card Cheryl thank you so much xxxx

Sue came over yesterday and we decided we would go out for lunch for a change, neither of us could decide where so we headed to the Range to start with, as we had a nice lunch in their last time, we were very disappointed with what they had on offer this time though so just spent a couple of hours wandering around the shop, I got a couple more decorations and a couple of Christmas presents, but no craft goodies.  We then headed off to Dunelm for lunch and we were intending to go into Hobbycraft too but in true Sue/Sandra style we ran out of time.  We both had a toasted sandwhich (as there wasn't much choice) then I had a piece of Coconut/Jam slice and Sue had Chocolate Mint Shard cake, both of which were delicious.
After a long sit down we had a good browse around Dunelm, around their Christmas bits, not that there was much left to browse, we then moved to curtains and well just about everything, we found some lovely bargain curtains that were an unbelievable price, that we where both tempted by.
As we were walking towards the exit a Teenager can racing out of a side aisle causing us to stop abruptly, she was followed by a rather dubious looking family that were clearly Travellers/Gypsies, whatever the correct term is these days, we were a little taken a back but we carried on towards the checkout and stopped briefly to look at some more decorations, we then noticed the other young girl just brazenly walk out of the exit with Pillows, quilt and mattress topper, the older girl was then beside Sue and I trying to haul a huge box containing a Gas effect electric fire, that must have been 4 foot long by 3 foot wide over a security barrier, she was trying to ram it through and manipulate it over but couldn't quite manage it, she wasn't the least bit phased or embarrassed that we were stood, jaws dropped watching her, I did a one time think she was going to ask Sue to help!!  She then left the store along with the mother, the father was still somewhere inside though.  We went to the tills and explained what we had seen and that the girl had left the fire just where someone could reach over and take it.  The girl on the till wasn't the least bit surprised, she said, they were 10 times worse yesterday, there were groups of them that entered the store, caused a drama to create a distraction and which occupied security while the rest of them ran out with arms full !!  Sue and I just couldn't believe it, particularly how brazen they were, they had no shame!!
Rather a dramatic end to a lovely day out, thank you so much Sue for taking me out, I had a really lovely time, I don't think we stopped talking for the better part of 6 hours! xxxxx

Waiting for a few more parcels to arrive today, maybe start some wrapping up too!
Have a lovely day however you are spending it,